After recent events in the UK political scene, many have forecasted a decline in the economic performance of the UK industry starting in 2017. Are the March figures demonstrating this yet? Anglo studies some of the most reliable industry reports from IHS Markit in an attempt to answer this critical question.

We review below a series of figures reflecting the state of the economy from a construction and recruitment perspective.

The UK Civil Engineering activity is at its fastest pace of expansion so far in 2017.

IHS Markit reports that “UK construction companies reported a sustained recovery in work on civil engineering projects during March” as the index is at 53.5 in March, up from 53.3 in February.

“Construction companies reported a slight reduction in subcontractor usage in March, which was the first decline seen in 2017 to date.”

We are happy to find that “March data pointed to a solid expansion of staffing levels across the UK construction sector, which was generally linked to greater workloads and a rebound in confidence regarding the outlook for client demand. At 53.5, down from 54.0 in February, the seasonally adjusted Employment Index signalled that the rate of job creation continued to ease from January’s 8-month peak".

In terms of demand for permanent & contract staff by sector, one of the slowest growths in March, albeit still sharp, was signalled for Construction workers whilst the sharpest rates for growth were seen in Medical/ Care and Engineering (mainly blue collar). 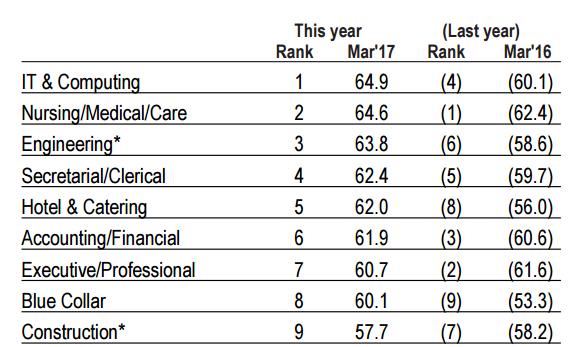 We noted a further rise in hourly pay rates for temporary/contract staff in March, as has been the case in each month since February 2013. That said, the rate of pay growth softened to a pace that, though solid, was the weakest in four months.

Data from the Office for National Statistics indicated that annual growth of employee earnings slowed to +2.2% in the three months to January. The weaker increase was largely driven by softer pay growth across the private sector.

Although these figures are not yet threatening for Construction professionals, it is important to note that the UK construction industry performance indicators for the first quarter of 2017 are revealing a slight decline compared to 2016 figures.

Thanx for good article & many tables as picture.

The Colne Valley Viaduct will be the UK’s longest railway bridge, stretching for more than two miles across a series of lakes and waterways between Hillingdon and the M25.   The railway bridge is designed to improve rail links between London, Birmingham and North, help

In a world-first, the UK utility is implementing early-warning system BurstDetect from technology company Ovarro, as part of its drive to eliminate serious pollution events in its region by 2025.   Through a dashboard, BurstDetect provides an overview of system status together with current

The Government has just concluded its consultation on developing a Storm Overflow Discharge Reduction Plan (SORP). Andy Godley, from the Water Research Centre (WRc), looks at the latest developments in wastewater flows and levels.   It is difficult to argue with the sentiments behind the

Job Title: Environmental Advisor Location: This is an agile role offering home working with travel required to offices and sites in London and South East We are currently recruiting for an Read More...
London, UK
Negotiable

My client is a major environmental consultancy with a strong presence across the UK and they are currently looking for Senior Ecology Directors for locations across the UK SENIOR ECOLOGY DIRECTORS Read More...
Search Looking for jobs?
Video

Ground engineering contractor Van Elle has been appointed to the piling framework for the west of Leeds section of the Transpennine Route Upgrade (TRU) programme....

Mace has been appointed as Commercial Partner on the National Highways CIP framework to deliver two major projects ...

Attend this conference and networking dinner to gain invaluable insight from the leaders responsible for building, shaping, and delivering the rail investment strategy of the North!

Celebrating Excellence In UK Water, 29 June 2022 at The Vox, Birmingham.

Find a new engineering job in the UK with Anglo Technical Recruitment. Browse permanent or temporary roles including jobs in IT, water, construction, civil, railways, energy and building services sectors.

To Continue Please Login or Register